Climate EngineeringTechEthos defines climate engineering as a technology family which enables the modification of natural processes [...] More represents a family of technologies – including primarily techniquesA technique is a procedure for realizing a goal [...] More for Carbon Dioxide Removal and for Solar Radiation Management – that could mitigate human-induced climate change. Some of the key ethical concerns surrounding these technologies include irreversibility, social inequality and transparency (for example, its imposition on some communities or countries that may not choose them) and responsibility towards future generations. 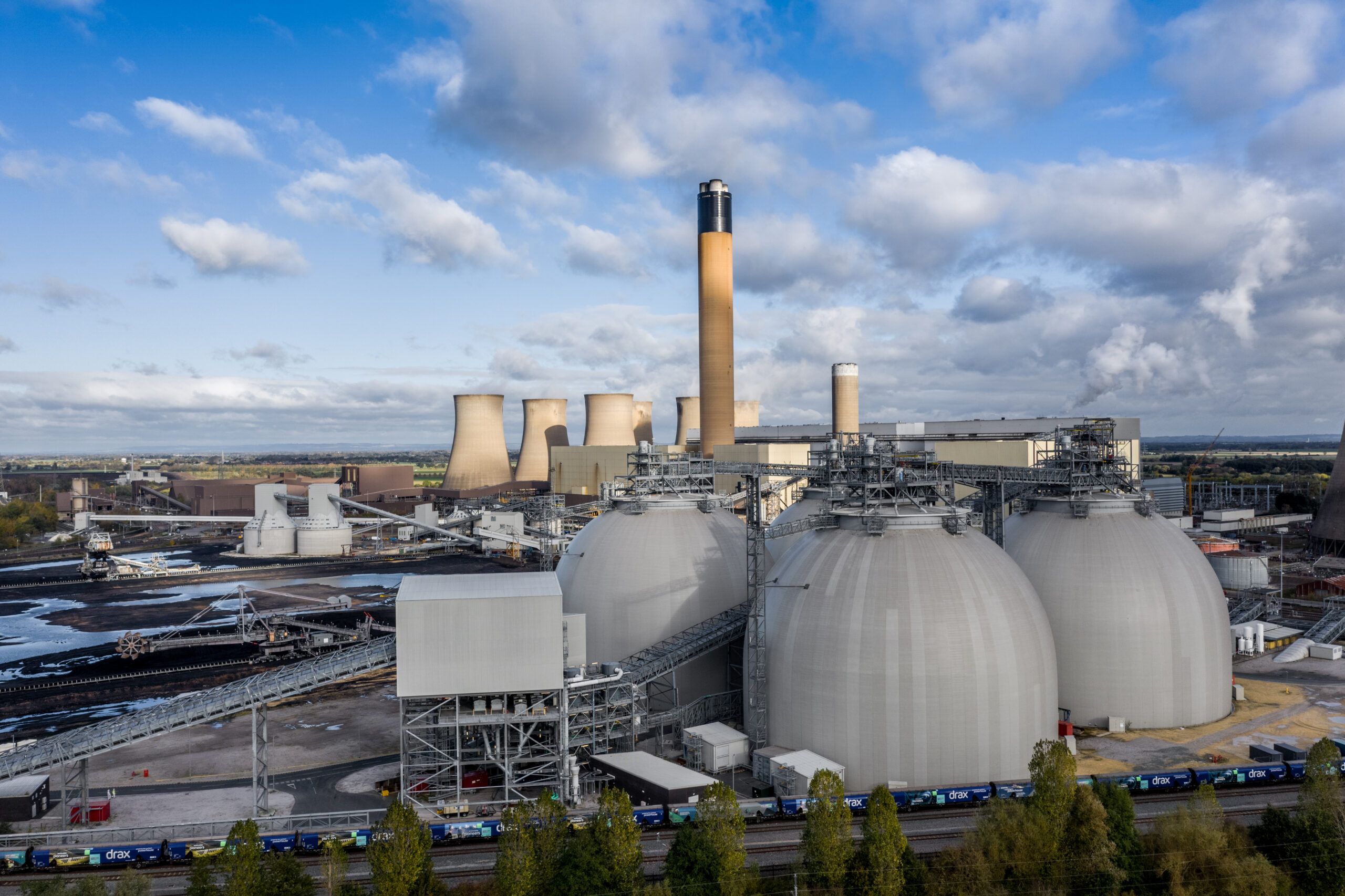 Climate Engineering represents a group of technologies that act on the Earth’s climate system to achieve a level of control over climate, thus holding the promise of mitigating climate change on a local and worldwide scale and detecting and responding to global threats due to the climate crisis. Also referred to as geoengineering, ‘Climate Engineering’ is a contentious term – you can read more about this in our glossary entry.

We distinguish between two main forms of Climate Engineering: Carbon Dioxide Removal (CDR), which removes atmospheric CO2 and store it in geological, terrestrial, or oceanic reservoirs, and Solar Radiation Management (SRM), which aims to reflect some sunlight and heat back into space. You can explore specific techniques that fall in these categories below.

Despite their high research and industrial relevance, ethical concerns arise around these technologies: who can access them? Will these technologies have an effect locally or globally, and who is going to decide about them? What could be the future environmental consequences of their applications?

‘Ethics by design’ is at the core of TechEthos. It was necessary to identify the broad array of human and environmental values and principles at stake in Climate Engineering, to be able to include them from the very beginning of the process of research and development. Based on our ethical analysis, we will propose how to enhance or adjust existing ethical codesEthical codes indicate responsibilities o which individuals or organisations hold themselves to account [...] More, guidelines or frameworks.

This core dilemma asks if meaningful climate change mitigration is still possible if artificial changes are promised as solutions to the climate crises. This can take two distinct forms. Firstly, when mitigation is modelled over longer periods of time, the use of cheaper climate engineering later in the century might be preferred over more expensive mitigation costs at present or in the near future. Secondly, this choice of waiting until later to mitigate climate change can be particularly attractive at a political level, slowing down policy makers’ near-term efforts. Moreover, with some techniques that promise to mask the effects of climate change, mitigation risks to be abandoned altogether, despite not being sure empirically if CDR or SRM are possible at a large scale.

This dilemma is closely related to that of moral hazard: the availability of climate engineering may be used as an argument by current generations to believe that they do not need to mitigate more rapidly now, thus passing the burden onto the next generation.

This dilemma emerges in context of the relationship between humanity and nature. Climate engineering seems to reflect an attitude of control or dominance over nature, to make it serve human beings. Researchers and ethicists consider that our current knowledge does not support some of the assumptions made about the possibility of achiving control over e.g., the global carbon cycle, while underestimating the harmful effects this could have. 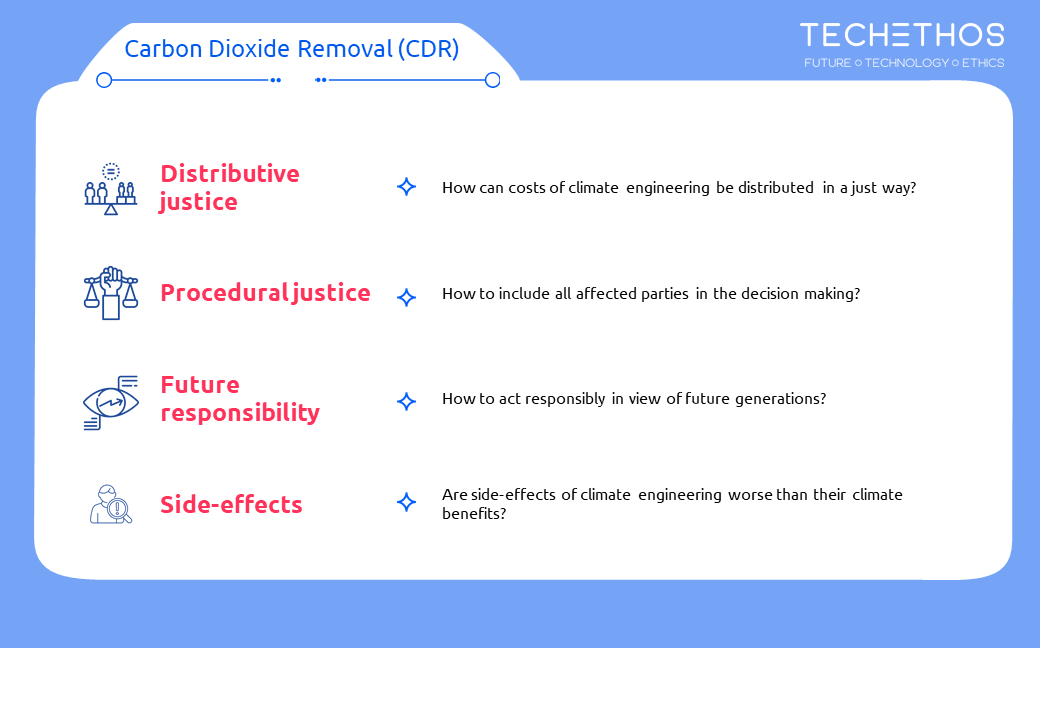 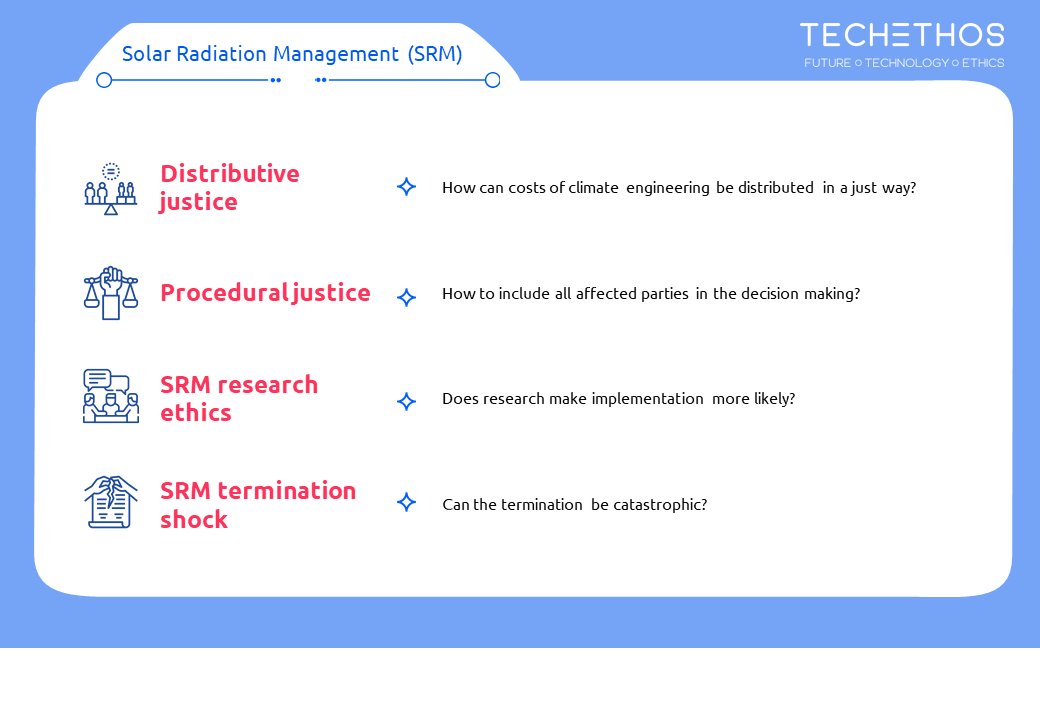 In line with our key aim to enhance and adjust ethical guidance (in the form of codes, guidelines and frameworks) in the area of Climate Engineering, our team scanned the literature to identify already existing guidance that specifically addresses Climate Engineering or which is considered relevant in this area.

Existing ethical codes, if any, are largely considered insufficient and relatively unknown among private entities engaging in Climate Engineering research. The literature argues for the responsibility of researchers themselves but also that of funders regarding compliance with ethical codes. The inter-governmental Food and Agriculture Organization (FAO) Code of Conduct for Responsible Fisheries is mentioned as a potential example upon which to develop a Climate Engineering code that is flexible enough to account for changing needs.

Researchers have called on the international community to engage in a dialogue regarding the social benefits and risks of Climate Engineering research given the lack of a generally-accepted ethical frameworkEthical frameworks outline general or specific principles [...] More. From their perspective, frameworks should be clearly defined and delimited and acknowledge the systemic impact of such technology families. The United Nations Framework Convention on Climate Change (UNFCCC), the Earth System Governance (ESG) Research Framework, and the Precautionary Decision-Making Framework (PDMF) are mentioned as potentially relevant in this endeavour.

There is no comprehensive or dedicated international or EU law governing Climate Engineering. However, many elements of this technology familyA technology family is a collection of technologies that share techniques that have common goals [...] are subject to existing laws and policies. Below, you can explore the legal frameworks and issues relevant to Climate Engineering and read about the next steps in our legal analysis.

Under international law, States could be held liable for harm caused to another State from a climate engineering activity.

TechEthos has looked in detail at applicable international and EU laws and policies, and in particular at the prohibition of transboundary environmental harm, or the ‘no-harm rule’. This ensures that activities within a state’s jurisdiction and control respect the environment of other states.

States have an obligation under international environmental law to ensure to protect the environment and human health when deploying climate engineering activities and to take steps to prevent transboundary environmental harm as much as possible.

TechEthos has looked in detail at international and EU law and policies, emission reduction goals, carbon emissions trading and geological storage of CO2.

Some proposals for solar climate engineering would involve activities in outer space.

TechEthos has considered specifically the relevance of international and EU laws and policies, state responsibilities in outerspace, environmental protection and liability from environmental harm in space, and the exploitation and mining of space resources.

Law of the Seas

While there is no comprehensive law of the seas treaty addressing climate engineering, associated activities that impact marine environments would be governed by existing international and EU law. Furthermore, there are dedicated – though non-binding – rules on ocean fertilisation and transboundary seabed CO2 storage, which were developed in response to concerns about proposed climate engineering projects.

Next steps in our legal analysis

TechEthos has analysed so far the obligations of States (for international law) and/or Member States (for EU law) and the rights of private individuals under those laws.

The obligations of private individuals and entities will be the focus on a report on the legal frameworks at the national level (forthcoming Winter 2022).

The work of these two reports, and the gaps and challenges in existing legal frameworks identified by this work, will form the basis for legal and policy recommendations in the TechEthos project in the coming months (forthcoming Spring 2023).

This type of analysis is helping us bring on board the concerns of different groups of actors and look at technologies from different perspectives.

TechEthos asked researchers, innovators, as well as technology, ethical, legal and economic experts, to consider several future scenarios for our selected technologies and provide their feedback regarding attitudes, proposals and solutions.

A series of events such as science cafés and workshops with local research and technology players will ask the public about the attitudes, values and concerns triggered by future scenarios for our selected technologies.

Events kicked off in the Summer 2022; discover the ‘science café’ format in our news article.

Media discourse on technologies both reflects and shapes public perceptions. As such, it is a powerful indicator of societal awareness and acceptance of these technologies. TechEthos carried out an analysis of the news stories published in 2020 and 2021 on our three technology families in 13 EU and non-EU countries (Austria, Czech Republic, France, Germany, Ireland, Italy, Netherlands, Romania, Serbia, Spain, Sweden, UK, and USA). This used state-of-the-art computational tools to collect, clean and analyse the data.

Furthermore, we could observe that solar engineering techniques are rather rarely discussed in new stories collected for this family of technologies. Technologies such as solar radiation management or cloud modification or whitening appeared rarely in the media scanned, while afforestation, reforestation, carbon capture, sequestration and storage are among the most discussed topics. Hence, the media discourse as captured by this study indicates there might be less public awareness of solar radiation techniques, compared to other climate engineering techniques such as afforestation or carbon capture, usage, and storage techniques.